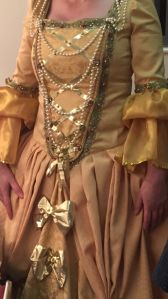 Be careful what you wish for

Before we’d had our costume fittings, we’d seen photos of some of the outfits for the Masquerade scene. They were amazing and diverse – lavish ball gowns, chinese coolies, pirates and hussars. And a monkey. I was determined I was not going to be that monkey. Oh no, I wanted a ball dress. The lavisher, more be-jewelled the better. I wanted to be gorgeous dammit!  And I was granted my wish – a golden gown with not just hoops and a bustle, but panniers as well. I took up a lot of space. Put it this way, my turning circle was quite large. I dripped pearls. Glittered with gold braid and bows. Ooh and I had a glittery golden mask too. Look at me, look at me!!

And then during the choreographing of the scene, the Director placed me on the very top step of the Masquerade stairs. I started to think that maybe being able to see my feet and the floor around my feet might have been A Good Thing. The first dress rehearsal arrived and we got to the point where we start going up the stairs.The boys go first and then the girls go up, threading their way between the boys. Up I went praying that my feet would find each stair, mentally apologising to those I banged into with the panniers. Did I mention that at this point it’s only the girls singing, at the low end of their register for us sopranos? I got to the top and while desperately trying to 1) stay upright, 2) figure out a way to move my foot off the train of the dress of the person in front of me, 3) sing, 4) dance and 5) smile, immediately started plotting how to sneak into the Monkey’s dressing-room and steal her costume. Imagine if I tripped and fell at the top of those stairs, it would be like a row of dominos tipping over. Oh the ignominy! Alternatively I could, as Miss P wickedly suggested, open my arms wide and take as many down with me as possible. It did get easier over time, but I never lost the little quiver of fear at each descent.

I’m stuck on you

Another theatre box moment. Whenever we – I and the two managers, and sometimes Raoul – were in the box, we were watching a performance or performance rehearsal. (Ed. Really? I’d never have guessed). M Firmin would stand behind me. M. Andre and I always had a moment where I turn to him and mouth something like ‘Lovely!’ at which he nods smilingly in agreement. Oscars all round. This particular time, as I turned back to look at the stage I felt a tug on the back of my head. I gently tilted my head forwards and a horrifying realisation dawned on me – my wig was stuck on M Firmin’s waistcoat button! What if he doesn’t realise and turns to leave, taking my wig with him? Or worse – what if the wig doesn’t come off and he drags me backwards off the chair? What to do? What to do? I gave another gentle tug on the button and heard a stifled snigger* and then his hand slowly inserts itself between us and attempts to unhook the button. Meanwhile Andre, unaware of the unfolding drama I’M A SOPRANO, OF COURSE IT’S A DRAMA is wondering why Firmin is laughing at Christine’s rendition of ‘Think of Me’. Fortunately we are untangled and I don’t have to default to Plan B**

The monkey atop a music box ‘in persian robes, playing the cymbals’ always sat at the beginning of the night next to the area where we were mic’d up. Each night, one of the sound guys would dress Monkey as a different character. It started benignly enough with Monkey holding a half-eaten banana. There followed Bagpipes and Kilt Monkey, Pirate Monkey, Copacabana Monkey and other drolleries. One night, Monkey’s on-stage failure to clap the cymbals, was explained the next evening by the arrival of several baby monkeys. Every night we looked forward to Monkey’s next incarnation. On the final night, Monkey’s appearance in a mini Phantom ensemble complete with mask may have brought a small tear to my eye, but I will neither confirm nor deny this.